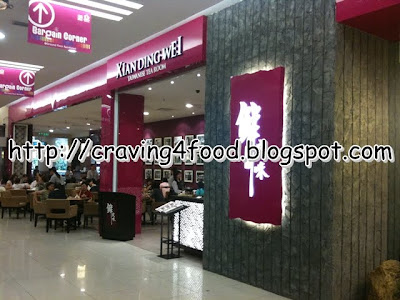 I heard about this restaurant even before it was opened not too long ago. The first if I am not mistaken was inside Sunway Pyramid. But my friend's feedback of the place wasn't that 'spectacular' to say the least. Well I always believe on my own taste bud and all so I'd decided to dine in one of the weekend. The one which I visited was the one located inside 1Utama New Wing. It's just opposite Oritental Craving. 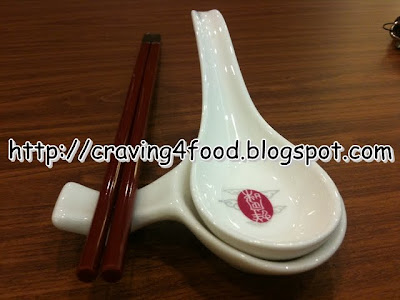 The decoration is just like any other Taiwanese styled restaurant i.e Fong Lye at The Gardens. The place was quite pack during lunch hour when we arrive. We were seated near the window at the entrance which quite nice as it wasn't that crowded at that section. They don't serve any tit bits like steamed peanuts or sort before the meal. So we just browsed through the menu and ordered some of their recommended dishes. 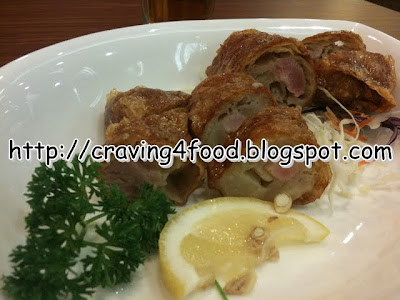 We were contemplating between ordering this dish and their famous potato balls. I had tried the one at Fong Lye and I didn't really think it was that much to shout about. So I decided to give the chicken roll a try. First impression was that the rolls isn't that properly arranged. I mean, this is a restaurant and they should serve the dish in a presentable way. The taste wise, it wasn't really that good. I think those Penang Lobak selling outside tasted better than this. This is too squishy and soft, not much texture. Sadly this is not that good at all. 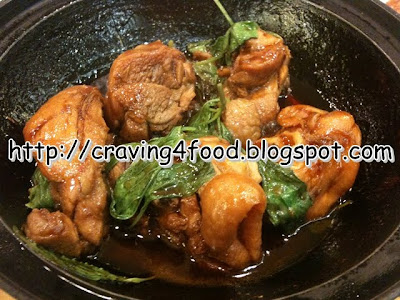 This is one of their famous dish and I think most of them who had been Taiwan would know bout it. It's called San Pe Chi or 3 Wine Chicken. The picture in the menu sure look a lot different from what they served though. Portion was generous but the taste was just normal and nothing to shout about. Didn't really tasted any wine in the clay pot. 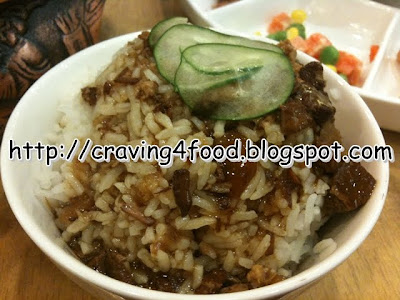 The set is served together with this bowl of steamed rice which is rinsed with stewed pork gravy. This is the same as the one at Fong Lye. But I prefer the latter as the rice is softer and more fragrant. 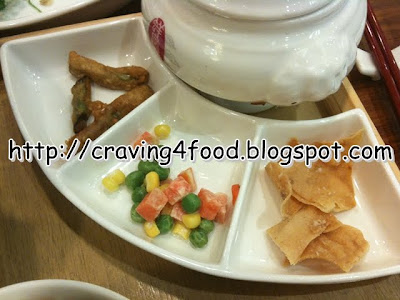 The side dishes for the set consists of some crackers, chilled carrots, green beans, corns and fried long bean. The side dishes are really pathetic. The crackers are tasteless. The chilled beans looks like they are fresh from the freezer and the long bean looks so 'old' and squishy. 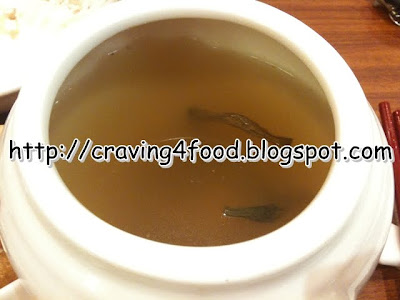 The set also comes with a bowl of soup which is not warm in this case. I thought that soup was supposed to be warm when it's served. There wasn't much pork or chicken or anything in the soup. Quite plain though. 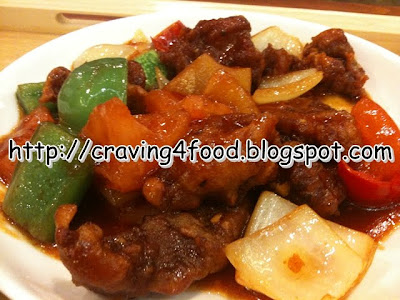 This is the set which babe ordered and as the name goes, it's actually the same as the sweet and sour pork (Kou Lou Yuk). Nothing special at all. She should have ordered the black pepper beef which is also recommended in their menu. The set comes with the same rice, soup and side dishes. I am not sure why they gave the same rice with the gravy which is salty but the chicken is sweet and sour. The taste doesn't really work good together. One word, weird! 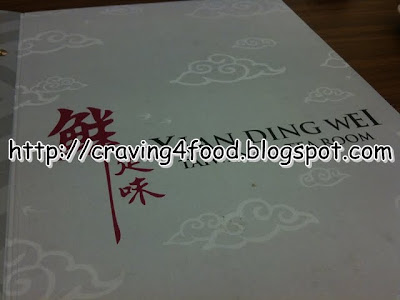 Overall, the place isn't as crowded as Fong Lye in The Gardens which you need to take number to get a seat. But then again, Fong Lye tasted better than this place. No wonder my friend didn't asked me to go and try it out. I am not really going back to the place unless necessary. But maybe my unliking might be someone else liking in this case. (Rating: 3.5 out of 5.0)

you should try pyramid branch.....service and food all are great...really, im not cheat u

i tot u told me the food over there is SO SO only wor. but like i said, Fong Lye is better lo. It's not the service but the food itself. hehe!

i had bring few friend who try fong lye before , all say the pyramid branch is the best...